In this essay, Rav Kasher explains a verse in Isaiah and gives a geopolitical drasha on why the Apollo 11 Moon Landing is a great sign for the Jewish people.

And the moon shall be embarrassed 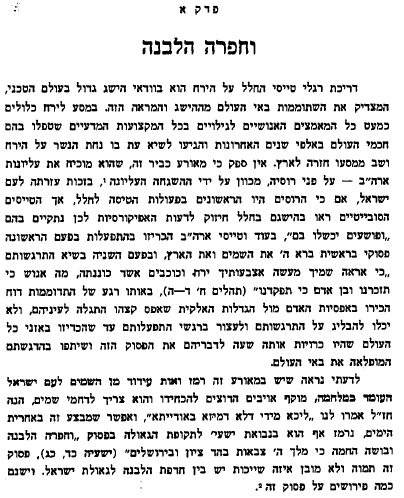 Astronauts setting foot on the moon is most definitely a great achievement of the technical world, that justifies the astonishment of people worldwide from this achievement and [wondrous] sight. Traveling to the Moon includes almost all of the human achievements that have been revealed in all scientific fields that were studied by all of the wise men of the world for thousands of years, that reached this peak of achievement at the moment that the Eagle landed on the moon and returned safely to Earth. There is no doubt that this mighty event, which proves the superiority of the United States over Russia, was intended by Divine Providence in the merit of her helping Am Yisrael, even though the Russians were first in the earliest efforts in space.

For the Soviet cosmonauts saw in their achievements in space a support for their heretical ideas and therefore the verse “and the wicked shall stumble in them” (Hosea 14:10) is fulfilled by them. Whereas the American astronauts proclaimed in rapture, first by quoting from Genesis “In the beginning, God created the heavens and the Earth”, and a second time, at the height of their being moved, “when I behold Your heavens, the work of Your fingers, the Moon and the stars that you have established. What is man that You should remember him and humanity that You take count of them” (Psalms 8:4-5). At that moment of spiritual introspection they recognized the nothingness of man against the greatness of God, Who has revealed nothing but the tiniest bit of His “edges” [meaning “His Greatness”; this phrase is a play on Numbers 23:13 – AG] to their eyes, and they could not hold back their feelings nor stop their feelings of rapture until they announced them to the ears of the world, which were all listening to them at that time read these verses, and included in their feelings of wonder all those all around the world.

In my opinion, it seems that there is in this event a hint and a sign of support from Heaven for Am Yisrael, who stand in war surrounded by enemies that are trying to destroy them and they are in need of Heavenly Mercy. Chazal [the rabbis of the Talmud – AG] said to us that “there is nothing that is not hinted to in the Torah” and it is possible that this mission in the end of days was hinted to in the prophecy of Isaiah regarding the redemption in the verse “And the Moon shall be embarrassed and the Sun ashamed because the Lord of Hosts will reign in Mount Zion and Jerusalem” (Isaiah 24:23). This verse is puzzling and it is not understood what is the connection between the Moon being embarrassed and the redemption of Israel. And there are several different explanations of this verse…

[Rav Kasher here cites several explanations of classical Biblical commentators, which I have skipped in translation, for now – AG]

According to the first explanation [of Abravanel, which Kasher cited – AG] “the Moon shall be embarrassed” refers to herself: that her influence on those nations will be annulled. According to the second, the intention is referring to the nations themselves and not the Moon itself. It seems from his words in the second sense that he wrote, and this is his language: “therefore it said ‘and the Moon shall be embarrassed and the Sun ashamed’ that is to say that no man will worship the Moon or the Sun. Or it is a hint referring to the Moon regarding the Ishmaelite nation who are drawn after her, etc. And the idea is that these two nations who include today most of the people of the world, they will all be embarrassed and ashamed because “the Lord of Hosts will reign in Zion and Jerusalem”, and He will be King over the whole world and no other deity etc.” And this explanation is what was written by [Targum] Jonathan in that it refers to the nations, but he [Abravanel] added his own idea that’s the Moon and the Sun represent Ishmael and Edom.

[I skipped a little more – AG]

And we have a sign for this idea in that the symbol on the Egyptian flag, and likewise many Islamic countries, is the Moon, and it is explained in their sources that they received it as a holy sign from Assyria.

Well, not exactly… The modern Egyptian flag (nor that used in 1969) does not feature the Moon. But almost all earlier versions of Egyptian flags until 1958 or so did.

But the commentaries on the verse that the meaning is the Moon herself, that she will cover herself from embarrassment, we still did not know what the explanation of this embarrassment was, and how this disgrace was expressed. It is possible, in light of this mighty expedition, that stopped the breath of all the people of the world due to the greatness of rapture and emotion, this expression of the prophet “and the Moon shall be embarrassed” can [now] be understood. Maybe it hints at this event before us that the conquest of the Moon has been achieved. For there can be no greater embarrassment than this; that men who dwell on Earth enter her borders, venture into space, enter the Moon’s domain, land on the surface of the Moon like uninvited guests, act there as if it was their own, and conquer her. And this embarrassment is also the portion of the Sun, the neighbor of the Moon. Isaiah prophecized that this would happen in an era when the Children of Israel will return to their land and [the verse] “for the Lord of Hosts will reign on Mt. Zion and Jerusalem” will be fulfilled. In that time the Egyptians will try to destroy and annihilate them, God forbid. Then God will protect them and their enemies will inherit defeat, that is “and the Moon shall be embarrassed”, that is to say that the flag of Egypt will be embarrassed and downgraded from her greatness. “And the Sun shall be ashamed” is a hint to Edom, as the Abravanel wrote.

Recall that only two years earlier, in 1967’s Six-Day War, Israel was saved from promised destruction in a miraculous victory over Egypt and her Arab allies.

And it can be said today to be referring to the “edom of our time”, that is Russia; that she is ashamed by the United States overcoming her and beating her. In this she is reduced from her greatness because she thought that in this field she would exceed the United States.

It may be that Rav Kasher was referring to the Soviet Union as the “Edom of our time” due to the red color associated with the USSR flag and communism in general, similar to his focus on the symbolism of the Egyptian flag. More likely, it was due to the USSR’s oppressive anti-semitic policies and support for Israel’s enemies.

This event is a sign and wonder from Heaven to strengthen Am Yisrael, that we are standing in the days of the footsteps of the Messiah, and we will soon merit that “the Lord of Hosts will reign in Mt. Zion and Jerusalem”.