In 1969 Rabbi Menachem Kasher, one of the gedolim [= great Torah scholars] of the twentieth century, published a series of Torah thought essays related to the most amazing event of his time, or any time ever, in human history: the Apollo 11 Moon Landing. He collectively titled these essays HaAdam Al Hayareach, L’or HaTorah VeHaemunah  (Man on the Moon, In the Light of the Torah and Faith; the latter subtitle/phrase only appears on the cover, not the title page.)

In honor of the 50th Anniversary of the Apollo 11 Moon Landing, this week I am presenting some translated (by me) excerpts of these essays (with minimal comments of my own.) So sit back and enjoy the four-day journey to the (anniversary of) the Moon Landing. (By the way, the full text, in Hebrew, is available on HebrewBooks.org.)

First, the table of contents:

Ch. 1: And the Moon Shall be Embarrassed

Ch. 2: The Blessing on the Moon

Ch. 4: Are heavenly bodies alive and possessed of intelligence

Ch. 5: Keeping the Torah on the Moon

Ch. 6: Is there a place to use a phrase “The Holy Moon”, and is there a reason based on Torah thought to not go to the Moon

Ch. 7: The form and substance of the Moon

As I implied above, we won’t be covering all of these essays/chapters this week, but maybe next anniversary… 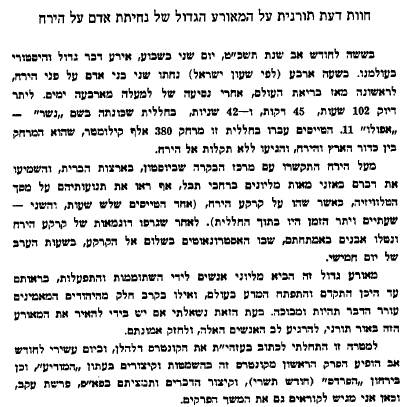 On Monday the sixth of Av, 5729, a great and historic event happened in our world. At 4 o’clock (Israeli time) two humans landed on the Moon, for the first time since the world was created, after a trip of over four days. To be more precise, 102 hours, 45 minutes and 42 seconds, in a spacecraft called “Eagle” – “Apollo” 11. The astronauts traveled in this spacecraft a distance of 380,000 km, which is the distance from the Earth to the Moon, and arrived without mishaps on the Moon.

From the Moon, they called mission control in Houston, USA, and their words were heard by hundreds of millions of people around the world, who even saw their movements on television screens while they spent time on the surface of the Moon (one of the astronauts 3 hours, the other over two hours; the rest of the time they were in the spacecraft). After shoveling some samples of the lunar surface, and taking rocks in their sacks, the astronauts returned safely to Earth, on Thursday evening.

This great event brought millions of people to stunned wonder, when they saw the extent of the progress of science in the world. And among some of the believing Jews the event gave rise to confusion and concern. At this time, I was asked if I could enlighten this event in the light of Torah, to calm the hearts of these people and to strengthen their faith.

To that end, I began to write, with God’s help, this composition, and on the 10th of Av, the first chapter appeared abridged and in brief in the newspaper “Hamodia”, and in the monthly “Hapardes” (Tishrei) and an abridged condensed version in פא”פ [?] Parshat Ekev. Here I present to the reader the rest of the chapters.

Just a few comments of my own on Rav Kasher’s introduction.

It is clear that Rav Kasher, a great Torah scholar was thoroughly engrossed by his own and the world’s fascination with the Moon Landing – to the extent that he could say exactly how many seconds long the Apollo 11 trip to the Moon was, and thought it was relevant to reiterate those details! Similarly, we see that he had a very positive view of this historic endeavor, referring to it as “great” and “wonder” several times over and praises the extent of scientific progress that the Landing demonstrates and represents.  Far from the narrow-minded view of some of the people he refers to, Rav Kasher obviously has a very open-minded and positive view of the value of human endeavor beyond the world of Torah.

As we shall see further in subsequent essays, Rav Kasher thought that this was a big deal, not just for the USA and the rest of the world, but for Torah believing Jews as well.